Thinking about shipping
your Maltese dog by Air?

Received a phone call from a man interested in purchasing a Maltese. After speaking to lets call him "Mr. Lewis", he informed me he was from Oklahoma and was very interested in purchasing another Maltese. He already owns one and would like to get another. After speaking to Mr. Lewis for quite some time, my feelings were that he was a very responsible pet owner and had a real love for the Maltese breed. I asked him if he had tried in Oklahoma to purchase one as I was located in Pennsylvania which is quite some distance from where he was located. Mr. Lewis said he had called around and could not locate one in his area anywhere. Well, against my better judgement, we came to an agreement that if the veterinarian didn't see a problem with it I would send "Molly" on a plane to him.

My wife and I take Molly to the veterinarian. Molly weighs in at 1 1/2 pounds, temperature of 101 and gets an excellent bill of health from the doctor. She informed me that flying is stressful for any animal, but other than that didn't see a problem with signing the necessary paperwork required by the Dept.of Agriculture that was needed by the airlines.

Now that Molly is OK to fly, I called Delta Airlines. I spoke to an agent there that tells me there are two ways to handle the flight. One is for $70.00. The dog and pet carrier would be more or less "treated like a piece of luggage" or my second option was that for $102.00 she would be left at the counter until boarding and would then be personally taken down to the plane by an agent. I chose the later after speaking with Mr. Lewis in Oklahoma City he agreed also. This "better" service is known as "Delta Dash". I also chose a flight that would not go through Atlanta but rather through Cincinatti, as I felt a smaller airport would be less chances for a mixup. WRONG. Anyway, the Delta crew tells me the whole trip counting the layover in Cincinatti would be only 5 hours total. I said great, a non-stop would be much nicer, but that did not exist. They told me the flight would be leaving Greater Pittsburgh airport at precisely 6:15 PM and to come an hour early, which we did...

Arrive at the airport, just like clockwork, everything is going smoothly. My wife, Molly and I get to the ticket counter and are greeted by the Delta agent. Very nice girl, needs to sharpen up on her computer skills, but other than that, very pleasant. Forty minutes later, and with the help of her supervisor and another Delta agent, the paperwork is now in order. WRONG. As we're walking away from the counter I take a peek at the airbill and see I'm shipping DOGS and they weigh 5 pounds. Molly must have gained a little weight on the way to the airport. And DOGS ??, well don't know, I guess her counting skills were a little weak also. The departing time was to be leaving Pittsburgh at 6:15 PM to arrive in Cincinatti in an hour then off to Oklahoma City arriving there at 10:40 PM.

Received a phone call at approximately 11:00 PM, it was Mr. Lewis calling from his cell phone from the Oklahoma City airport. "No Molly!" I said what do you mean "No Molly"!!? He said the Delta-Dash people knew nothing about a dog on board. There was nothing they could do at this hour, after all, it was getting close to quitin' time. Said for him to "call around" in the morning. She'll pop up somewhere. Well, I'll tell you one thing, try to get a hold of someone at that hour. Its almost impossible. But I did. I spoke to Mrs. Williams, a supervisor in Los Angeles. That was the best I could do. Mrs. Williams was also a very pleasant woman. Very courteous, very sympathetic about the situation. Said she would get to the bottom of this and locate Molly. WRONG....

Mrs. Williams calls me back. She found Molly!! WRONG. She said "there was a minor mixup". Didn't know how it happened but Molly was in Greensboro, North Carolina and was being attended by a veterinarian, and there was absolutely nothing to worry about. She spoke to the vet and he said "Molly was doing fine" and she would leave out on the first flight in the morning. They fed and watered her and she was happy as a lark. Boy were we relieved. All that worrying for nothing. Time to turn in for the night now....

Rise and shine. I think I'll call Greensboro and see how Molly is doing this morning before she continues the rest of her flight. I call the airport and speak to "Jane", a Delta agent. Another very pleasant and courteous woman. Very sympathetic also. "Good morning!", I said, "just calling to see how Molly is doing this morning. She was the Maltese that was accidentally flown to your airport last night". "Maltese?? What Maltese?", she said. "We have no dogs here at all this morning. Let me check with my supervisor" she said, "she arrived here at 4:30 AM this morning and if there was a Maltese here she would know it. I'll call you back". GULP.

I got a phone call back confirming what I did not want to hear. Molly was not there now and never was. That Mrs. Williams was such a nice woman too. Jane said "why don't I call Pittsburgh" and she would do some more checking around and see what could have possibly happened to Molly. She would call me back if she found out anything. So, I do what she says and call the Pittsburgh airport, the last place I saw poor Molly. Pittsburgh asks me all the same questions everybody else has asked already, the airbill number, flight number, etc.,etc. They said "Molly was taken to Oklahoma City last night and picked up" just like it was supposed to happen. WRONG. It was all a bad dream I figured. Well it wasn't a bad dream at all. Nobody knew where Molly was. Or did they? Jane did...

The phone rang at 9:30 AM, it was Jane in Greensboro. "Mr. Bianco" she said, "good news, I found Molly!" NOT WRONG. Sure enough Molly was still sitting in Cincinatti, Ohio, forgotten. She promised me she would would be on the next flight out to Oklahoma City, which she was. Thank you Jane. Mr. Lewis called me after uniting with his new puppy "Molly" and said other than her carrier being a bit messy she seemed to be in good shape considering the fact she was in her carrier for exactly 18 hours. He was to take her to the vet Monday morning and have her checked.

I'll let you be the judge. Maybe this was just bad luck, maybe it wasn't. My feelings are this.---SNIP-- And thats a fact, just like this story. And as for Mrs. Williams, well nevermind...

Delta Airlines completed a thorough investigation into the handling of this "DASH" shipment, apologized and made a very fair settlement with regard to the shipping charges. 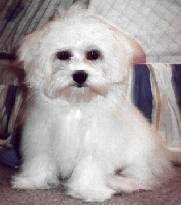 Before shipping your dog, you will have to purchase a crate. Although some airlines furnish crates, buying one will insure that it is clean and of adequate size. Crates are available at pet and discount stores such as Walmart and K-Marts and should be sturdily constructed with secure, strong latches that can be easily opened in an emergency. A broken crate can result in a frightened dog running loose on a busy airport runway, so be sure your crate is secure and has strong handles or grips.

The crate should be large enough to allow your Maltese to stand-up, turn around and to lie down. There should be adequate ventilation on opposing sides (for better air circulation) with exterior rims or knobs to prevent the airflow from being blocked by another object. The bottom should be leak-proof and covered with plenty of absorbent material. Be sure that there is a generous water holder inside. The crate should be clearly labeled "LIVE ANIMAL", with upright arrows. Your name, address and phone number should be securely attached. Another name and phone number to reach in case of an emergency is also helpful, especially if you are traveling as well.

Before the trip, allow your Maltese some time to become used to the crate. Leave it open in the house with a comfortable cushion and a favorite toy inside. You may also want to try taking him in his crate for short excursions in the car.

Try to avoid shipping a dog or puppy in the middle of the summer. Although federal law (and common sense) prohibits airlines from transporting animals as cargo when the temperature is below 45° F or more than 85° F for longer than 45 minutes, delays can create a nightmare situation for your pet. Choose flight times when outside temperatures will be moderate. Always choose an early morning flight in the Summer and mid-afternoon in the Winter. It is also wise to avoid shipping an animal during peak travel times like Friday nights or holidays. Always choose the shortest flight being non-stop only. Stay away from connecting flights if at all possible.The average price for a one-way trip for pets in the USA is approximately $65.

The option of "counter-to-counter" shipping is usually not worth the extra expense and I would only consider it on long or overseas flights. In this case, the dog arrives at the airport 30 minutes to one hour before the flight and is placed on board immediately before the flight leaves (he rests in the cargo office until then). When the plane arrives at the destination, the dog is removed first thing and is brought to the cargo office (or through customs and then directly to the office). Instead of the normal 1 hour wait, you will receive your dog in maybe 20 - 30 minutes after the arrival of the flight. This service may require a reservation, so check with the airline.

Within the United States, the Department of Agriculture has set down some rules for shipping dogs. A puppy must be at least 8 weeks old and fully weaned, although 12 weeks is much, much better. Most airlines require health certificates that are issued within 10 days of the date of departure. Rabies and vaccination certificates may also be needed. It is your responsibility to verify your dog's health and to find out what documentation your airline requires.

International travel is much more involved. Many countries have a quarantine period. England and Scotland for example, has a 6 month quarantine for dogs! Some countries (and Hawaii!) have a quarantine situation that doesn't allow animals to enter...even in transit! If your dog is being shipped internationally, check with the embassy or consulate of the country well in advance of your Maltese departure date.